↓
Home→The Law→Yes, We Do Have a Rat Your Neighbor Law

This is the law under which the Orlando Killer’s wife, and anyone else who knew of his plans, can be prosecuted.

During the cold war the Soviet people (subjects) were expected to watch their neighbors, strangers, and even family and friends. and required by law (the KGB) to report suspicious activity to the police. (also the KGB)

We Have That Law in America! 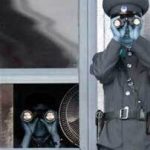 If I was a wagering man, which I am, (assuming I already know the outcome) I’d bet Dollars to Donuts that one or more of our readers here might just be a felon and not know it.

Does anybody know a convicted felon or “other prohibited person” who has access to a firearm, even old Uncle Jeb’s Squirrel gun?

The person doesn’t have to own the gun, just know where it is and be able to get to it.

If you know anyone like that, the law says that you must turn them in.

What if you discovered your spouse, child, friend or relative was stealing from the Federal bank where they worked part time?

Would your first instinct be to drive home a “what the H-E-L-L were you thinking!” scare lesson, make (covert) restitution, find out why they did it and get them some help? …

Would you do as proscribed by law, and report them to the nearest Judge, Policeman or Military Officer?

Title 18 U.S.C. § 4: Misprision of felony: Whoever, having knowledge of the actual commission of a felony cognizable by a court of the United States, conceals and does not as soon as possible make known the same to some judge or other person in civil or military authority under the United States, shall be fined under this title or imprisoned not more than three years, or both.

Hey, it’s the law, and by not obeying it YOU could also be a felon. And if you told me about it, even in “double extra super friendship hope to die” mode, I would be obligated to rat on both you and your spouse, child, friend or relative.

Rat Out Your Neighbor it’s the Law!

Turn In Your Friends: it’s the Law

Oh, but ratting out that Muslim guy who has been buying all of the fertilizer? — That’s racist profiling.

And exposing a Government Agency that’s breaking the law and violating the Constitution every day, that’s treason.

But what do I know? I’m just a conflict weary old ex-spook.

And that’s the view from Egg Manor