The value of knowledge gained and lessons learned over a lifetime is only realized when that knowledge and experience is shared to the benefit of others. Well I’ve been there, done that, and I probably have the T-shirt.

Knowledge is reasonably easy to share, just read or write a book! The benefits of good, bad and just plain rude lessons of life and business, however, are usually acquired through painful and/or expensive experience. I gained this valuable insight within a surprising number of diverse industries, technologies and professions.

I now provide a limited number of select clients the benefit of important lessons learned from a chaotic lifetime of trial and error, cloak and dagger, surprising successes, moronic blunders and rookie mistakes, my own and others.

My painfully eclectic career spans over 50 years, and almost as many disciplines. Throughout my career in private enterprise, it was  rumored that I had been recruited, trained and retained and/or was working for a disputed number of three-letter agencies. I cannot and will not confirm nor deny those absurd allegations, as neither will they, assuming they exist. But it’s been over Fourty Years so I’m gonna talk about part of it … maybe … assuming it happened.

You, however, may be the judge when you evaluate the results of my engagement and my insights into government operations and the intelligence and security communities in general. New projects are now considered by reference only.

I am an active member of the Association for Intelligence Officers*, an ARPANET veteran, and have been an Internet Innovator since before the Internet was the Internet. (Or Al Gore invented it, I forget)

Before leaving my home town in Southern Virginia for exotic places, spooky business and other Adrenalin producing activities, I received a firm grounding in the graphic arts, publishing and printing industries. During my first year of community college, I was responsible for the repro department at National Homes Corporation, including offset press operations. Later I ran process camera operations and darkroom at Bassett Printing Corporation. Training and duties while there included film processing, color separations, offset platemaking, stripping, makeready and paste-up — and photography, which lit a spark.

I eventually settled inside the Beltway. My spot news, photo-journalism and people skills were finely honed on diverse assignments ranging from White House and embassy row receptions to West Virginia coal mines and Oklahoma Indian reservations.

I was already a credentialed, working press photographer for Washington’s News Media Pictures when I was accepted into the Hollywood Camera Guild in 1971.

I studied Engineering and Art at UVA and UMD and I earned my diploma in professional photography in 1972.

I refined a talent for picking out inconsistencies, unintended consequences, loopholes, omissions and contradictions in agreements, contracts, drawings, photographs and other documents when I was Senior Contract Analyst in the change order department for a Maryland structural steel fabricator.

My primary task was identifying profitable contract errors, loopholes and contradictions and exploiting them in the most profitable way. Later, I joined an architectural firm and among my duties from the ‘other side of the fence’ was identifying and neutralizing these same contract issues before they escalated into problems because of shady characters such as my former self. 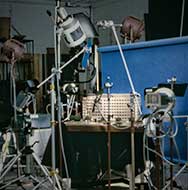 My commercial and studio experience expanded during my time as Studio Manager at the Capitol Hill studios of Salsbery Studios/UPI Compix. Assignments ranged from small product and catalog photography to magazine covers, fashion and food, both in-studio and on location.

My technology background again came into play in my role as Technology Director and Studio Manager at the Forte Group, a Washington DC Area graphic design, photography and computer graphics company. While there I developed LabTrak, a computer software system to help even novices analyze and manage the many variables in a color photo laboratory.

I was soon recruited to manage the optical effects department and processing and imaging labs at ImageMatrix, another Virginia computer imaging and design studio.

I later returned to the Forte Group as an industry consultant to the president, where I implemented and managed a variety of computer imaging systems.

During this time I served as Three-term Vice President of the Management Graphics International User Group. I was factory trained at MGI in Minneapolis to install, program, service and train end-users on their line of DEC based data concentrators, graphic design workstations and film recorders. I designed, developed and marketed a simple to use, menu-based interface to the complex, command line driven PDP-11 operating system and the associated MGI imaging applications software.

worked in the production and delivery of live educational satellite broadcasts from The Congo to secondary schools across the nation as on site collaborator with VideoLinx Communications. While there I designed and implemented an Internet-based video room and equipment reservations and rental database system.

instrumental in the design, construction, implementation and operational testing of remote warfare simulations for the U.S. Army at Fort Belvoir, VA. These video-wall presentations combined live and stored video across secure military satellite connections between bases worldwide. Working with VideoLinx, the Department of the Army, Raytheon Corporation and SAIC, my duties included design, sourcing, acquisition and assembly of audio and video equipment racks and secure communications interfaces. We were eventually tasked with live participation during the live execution of the classified exercises at the Ft. Belvoiir facility.

During my years as a trainer, public speaker and workshop leader for National Seminars Group, the continuing education division of Rockhurst University, I “turned on the lights,” for thousands of people, nationwide, helping them cut through the techno-babble and acronyms surrounding the Internet and related technologies. My programs have been described as informative, inspiring and exciting, and never boring.

My exposure to the Wine and Spirits industries began in 1998 when I designed and produced the first Internet presence for Kobrand Corporation, a major importer and distributor of wines and spirits. I was hired by Kobrand as Director of Internet Technology in 2000 where I developed many practical systems and programs unique to the industry.

Time spent photographing vineyards in Napa, however, reignited the photography spark, and after Ten years in the industry I reopened my old business, this time allowing me the freedom to pursue my many interests on my own terms.

I stay faithful to the motto I established for Nuance Data Systems in 1984:

“Technology Should Set You Free, Not Make You Crazy!”

My speaking skills were honed before I graduated high-school as a part-time radio announcer and country music DJ. This is where I picked up my ‘handle,’ The Eggman’ back in 1964. (Predating Sgt. Pepper’s)

And OK, Yes, I spent several years as a full-time spook and quite a few more as a contractor. Happy now?

*The opinions expressed in this website and any associated online forums are those of the individual writer(s), and do not reflect the position of, or the endorsement by, the Association of Former Intelligence Officers, a non-partisan, educational association, or its members, officers, chapters, or board.