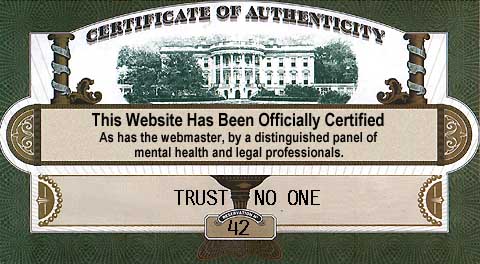 This website uses 100% recycled electrons, and any trees that died to generate the electricity did so millions of years ago. No animal testing was performed in the development of this Website, (though my cat, Morganna would like to think she participated) and no whales or dolphins were harmed. No user serviceable parts inside. Do not put in mouth or rectum. Not demonstrated to be harmful to pregnant women, though if you are pregnant or plan to be pregnant you should not stare directly into the underlying concepts. Use in combination with alcohol or other drugs may enhance effect. Do not use in bathtub if plugged into the mains. Do not view this site while driving a motor vehicle or operating heavy equipment. Do not use if vacuum seal has been broken. Refrigerate after opening. Contains 100% artificial ingredients, no calories and less than one gram of fat. Dispose of properly. Morons should only use under direct supervision of people who possess a clue.

Nothing in this website is intended to; encourage anyone to do anything that might break any rule, law, regulation, ordinance, covenant, suggestion, official sign, reasonable direction of a police officer or any act ruled inappropriate by any authority, whether or not sanctioned by the current authority or b) offend, threaten to offend or think about offending anyone else, including; every possible combination of cultural, intellectual, physical, philosophical, genetic and other irrelevant differences between various; peoples, individuals, species and all other entities and creatures, living or dead who. either/or were, are, have yet to be, ought to be or never will be in this or any other universe, dimension, reality or quantum entity yet to be discovered. If something here offends you, get a life!

All opinions expressed are mine, and mine alone, you can’t have them.
If you did, you would be as clueless as I am.

WARNING: May Be Habit Forming

The Management Can Not Be Responsible for Unintentional Enlightenment

The JumpGate is a Production of
Ira M. Wirth and Neamiah J. Milyuns
Wirth-Milyuns Productions
“If Its Worth Anything — Its Wirth-Milyuns”
of Course It’s Copyright © 1998-2015
By T. S. Eggleston