You might want to put that in your “urban slang” dictionary and spell checker because odds are, you are one! 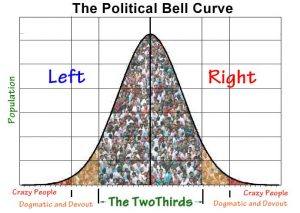 Perhaps, long ago, daily life was so uncomplicated that a ‘binary’ system, in which the majority of the population could be divided into two, clear-cut, right and left categories was adequate.

At one time, perhaps the concept of Red and Blue states made sense.

The national issues directly affecting our individual lives today, however, are numerous, complex and diverse. So much so that attempting to cram 280 Million people of all persuasions into two, three, four or more narrowly defined cubbyholes called political parties is neither practical nor possible.

A person might be anti-abortion (Democrat) and also be pro-death penalty. (Republican) Perhaps they are in favor of both small government and a public health care system.

One could stand against prayer in schools but not at ball games or public ceremonies.

And yes, a person can be an atheist and still be deeply committed to morality and “Christian Style” family values.

What’s A Free Thinking American Such As Yourself To Do?

Since we seem to have an incessant need to classify ourselves as belonging to one political faction or another, I’ve taken the liberty of coining a term which seems to handily describe at least two-thirds of the people that I know.

This 2/3 (minimum) of the population are Indepublitaricrats.

a) An individual who embraces one or more political and/or philosophical ideals from more than one and/or none of the major, established political parties of the day.

b) The true political affiliation of most 21st Century Americans.