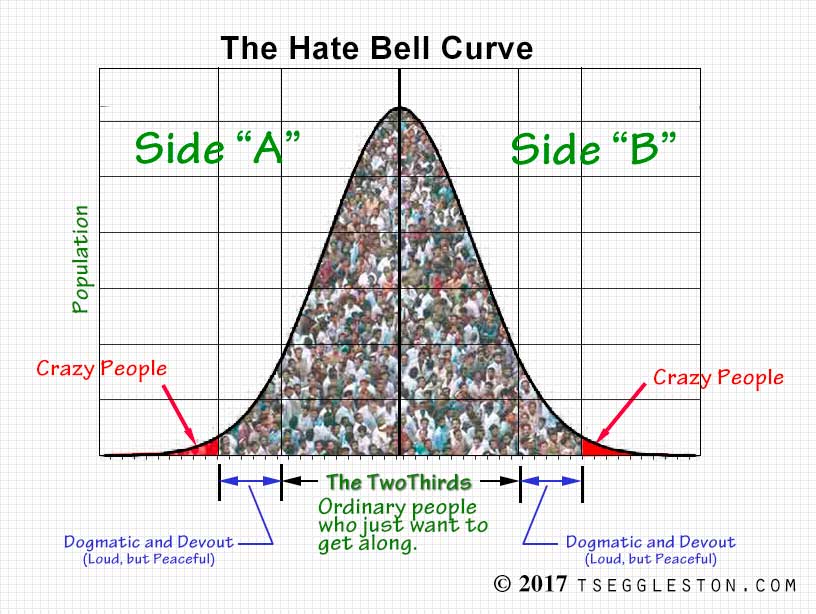 Thanks mostly to the de-evolution of formerly legitimate news media into tabloid journalists, the overwhelming majority of the population is controlled by Two, statistically insignificant but STARK RAVING CRAZY MINORITIES.

Sides “A” and “B” could be almost any divisive or controversial issue.

While the Crazy Faction may not physically control the bulk of the population, they do control the information served up to us. A standard saying in the news business is “If it bleeds, it leads.”

Today, however, identity-based, whiney, sensationalistic, violent, and divisive stories and opinions not only dominate mainstream printed and digital news, but social media as well.

Over the top, pseudo-news and misleading headlines dominate the mainstream media as they endeavor to hide, demonize or editorialize away anything that does not comply with their Leftist Liberal Communist ideals.

“They” reassigned sports commentator Robert Lee away from a broadcast in Charlottesville because some [who are they?] felt that his name (he’s Oriental BTW) might be offensive to some.

Christopher Columbus statue and Grant’s Tomb are under threat in New York.

The absurdity of the rhetoric will compound until ‘mainstream’ news and information is no longer delivered through the filters of loud, violent fringes of identity politics and hate.

But what do I know? I’m just a conflict weary old man.