↓
Home→Archive→Who Us Is, and Why We Are In Danger!

Or – Look what happened while I was distracted by the Kardassian’s?

But here they are all working together, peacefully, in cooperation for a common cause.

The above strange mix of bedfellows sounds like horror fiction, an alternate universe, or Dante’s worst vision of Hell, but we are going to have to make it happen.

We have to get our acts together, by getting our actions together. This is a fact, that will soon become painfully obvious.

Many think that the United States is on a path toward Socialism, and they may be right. Marxist Socialism, distasteful though it may be, however, should not be the ultimate fear in the minds of freedom loving Americans.

Our current course of progressive liberalism is merely frightening, but the underside of the beast was, until recently, unthinkable, or at least Tin-foil hat crazy.

You can look to history books, most of Europe, and bankrupt U.S. Cities for examples of failed Socialist experiments.

For the pending disaster of which I speak, however, consider Dearborn, Michigan. Be careful how closely you look, and what questions you ask if you are not of the Muslim faith. With a Muslim population of 35% and growing, Dearborn, a Detroit suberb, rapidly became a “No Go Zone” for non Muslims.

Small pockets of the country, some urban and many rural, are now being ‘quietly settled’ by Muslims. In a typical small town the Islamic voting population can grow quickly to the point where they vote themselves, onto school boards, city and town councils, county boards and eventually state and federal offices.

They are the town police, mayor, teachers, judges, laborers and merchant’s. They seem like good, peaceful people and good neighbors. They seem that way until they decide that ‘outsiders’ such as yourself and your family are no longer welcome in “their town.”.

It is patient, and it’s march may be slow, like heavy metal poisoning. The symptoms, however, are clear if you make an effort to find them.

It has a name, and a even a website dedicated to it. 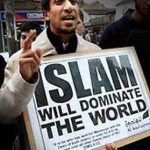 If you haven’t noticed, pull your head from the sand for a moment and consider the incredible inroads made by Islamic Radicals in Europe in the last few years, and now, in the United States.

Numerous influential government officials and advisers at all levels have proven ties to the Muslim Brotherhood and the Nation of Islam. Synagogues, Temples, and Churches are not specifically exempted from surveillance laws — Mosques, however, often are.

Several Mega-Mosques are now under construction in the US, with more planned.

Militant Islamists are like Cockroaches, for every one you see, there are hundreds in the walls.
(No offense to our friends in the Insect kingdom intended)

Political correctness, a self-reinforcing disease brainwashing the masses, is no longer a symptom of a disease, but a plague in itself.

If the dividing line between politically correct and polite becomes any further blurred, only radical change will stop it.

Training camps, retreats and compounds are already in place across the country. These are “religious operations,” and pay little in taxes, and are not subject to the usual government audits, scrutiny surveillance or investigation.

Muslim Women (or men dressed as women) are allowed through airport security in full burka, yet a Nun has to give up her rosary.

Though virtually every major global terrorist act can be connected to Islam, it is not considered Politically Correct to connect Islam to terrorism.

The very tolerance upon which we would like to pride ourselves as a nation, may be our destruction. It’s a fact that in America, different religions don’t see eye-to-eye on many, if not most things. Some faiths seem strange, even insane. Others believe that anyone who isn’t them is going to Hell and some people don’t believe anything other than all religion is bogus.

Our core differences are usually expressed peacefully with a demonstration or two, a lot of “you’re going to Hell’s,” and some scripture citations followed by the inevitable judging and name calling. Everybody then prays to who or whatever they pray to, if anything, and goes home to disagree another day.

You really don’t hear a lot about radical Presbyterians beheading militant Mormons on city streets do you? Catholics and Protestant’s aren’t gunning one another down here, and even though the atheists make themselves a pain in the ass, they don’t advocate hanging ‘believers.’ 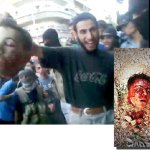 Militant Islamists are butchering people now. When there are no outsiders handy they happily butcher their own. They don’t just kill people, but brutally torture anyone who does not conform to their narrowly defined, inviolate wishes of their God. I would say they behave like animals, except that animals get no joy from killing. These monsters literally relish the smell of their victim’s blood.

These thugs are loyal foot soldiers of Islam and truly believe they are in a war for their souls. Many of them willingly and joyfully cry “Allahu Akbar” as they detonate their way to Heaven and their seventy-two virgins.

By every definition of the phrase, these are lunatic fanatics. I only call them soldiers because Militant Islam is not a faith, it is a Nation. The master plan of the militant Nation of Islam makes WWII Nazism seem like a benevolent operation. At least Hitler didn’t do it in the name of his God.

Other than everyone else who is not them, where do you fit on their radical agenda, and where are you on their ideological extermination list.

Islam and The LGBT community:

If you think evangelical Christians are a pain, try Islam on for size. These wonderfully tolerant humanitarians won’t understand, respect or tolerate you, they’ll just exterminate you. This doesn’t mean that they won’t continue raping infants and children — apparently Mohamed is OK with that.

Frankly, I don’t know enough to speak on the Muslim treatment of Lesbians, but if it’s anything like the way they treat women in general, you gal’s have a real treat in store under Islam.

BTW: If you are married or in a domestic partnership, you’ve left a convenient paper trail behind so that when they do take over the town, then the city, and county governments, they’ll have nice, alphabetized lists of whom to persecute, prosecute or slaughter.

Trans-genders might live a little while longer. I suppose that “under your burka, no one knows you’re a man,” applies here.

I think most of us will agree, however, that Sharia Law and Islamic Culture don’t provide a particularly nurturing environment for any type of alternative lifestyle. (Except, perhaps bestiality and pedophilia.)

Islam and Women in General: 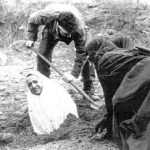 Pro-choice, pro-life, housewife or career woman – it won’t matter a tinker’s damn at this point (apologies Hillary) because you will have Zero rights.

You will be chattel, to be bought, sold, cast away and burned like so many old clothes. If you are lucky, very lucky, you might avoid being stoned to death for disrespecting your slave masters. 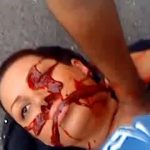 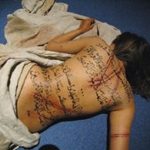 Assuming that you behave, you will probably receive only a few hundred lashes during your lifetime of fear and servitude. I also hear that Islamic divorces can get pretty bloody, even without lawyers. 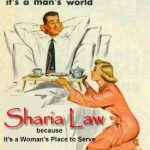 But at least the school overcrowding problem will be solved because women and girls will no longer be allowed to attend.

And forget voting, owning property or even driving because women will no longer be “persons.” 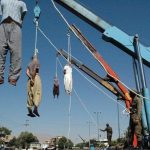 I hate to play to a stereotype, but most of you Hispanic folks are Catholic, right? I hear Allah isn’t really happy with Catholics either, so I’m sure your time in the cross-hairs won’t be far off. Right after the Jews and Homosexuals.

For a refresher course, remember how Muslim countries would treat Christians illegally crossing their borders. You’d still be deported, only it would be one small piece at a time.

Slaughtering innocents, raping babies, stoning women and such might be the Militant Islamic’s idea of fun for an afternoon, but they will eventually get back to Allah’s real business — exterminating the Jews, Christians, Homosexuals, Atheists, Hindu’s and modern civilization in general.

So you see folks, it really is an “us against them” situation. The eye opener comes when you step way back and take an unbiased look at who “us” really is.

It’s time for Bible Thumpers to put the Hellfire and Brimstone on the back burner for a while. It’s time for every-day bigots to “fake” color blindness and for gay people to stop acting like a bunch of attention starved, spoiled children. And can we please ratchet down the abortion chatter for a while? In Islam, husbands do their own abortions, with long curved blades, in the street.

I want our civilization to survive long enough to have that and other arguments, so I’ll put it aside if you will, at least until we get this fixed.

More is at stake here than the right to peacefully hate one another, our very existence is in jeopardy. Maybe we can afford the luxury of bigotry and hate sometime in the future, but right now we are all, and by all, I mean every one of us who is not them, in a fight for our lives.

A bloated, corrupt, runaway government allows, and even facilitates the process, and our first and only priority should be getting our nation back into the hands of We The People. Can we please get along with one another just long enough to get our country under control?

Only then, can we be afforded the luxury of squabbling over comparatively irrelevant differences from choice of sleeping partner to skin color and political party.

If we don’t act soon, “those of us who are not them,” will vanish forever from the face of the Earth.

Because we have to. And it starts with you!

You’re one of Us.

Can we act like it for a while and get our country back?

And that’s the view from Egg Manor

aka The Original Eggman
(Accept No Imitations)