↓
Home→Commentary→Pete Seeger – The Story Behind the Photo 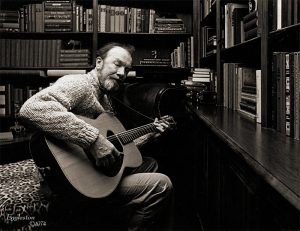 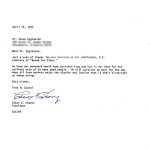 In 1974, Caesar Chavez, president of the United Farm Workers of America, (one of the FEW unions I actually supported,} called me to photograph the premier of Bound for Glory, the Woody Guthrie story.

Arlo Guthrie (Woody’s son of Alice’s Restaurant fame) and others who were influenced by this man, his cause and his music attended the after-party in DC.

Pete Seeger, whom I had never met, was among the guests. I introduced myself and asked for a photo. While he didn’t decline, he was gracious, but obviously not in the mood for a party.

We started chatting about music, and gossiping about the people there. After a few minutes, we wandered off into the library by ourselves where we started to reminisce a bit, mostly about dead musicians.

There was a guitar.

Pete then treated me to about an hour’s worth of very personal music, some of which I had never heard before or since, during which I caught this candid photograph.

I only ran into him once since then, and I reminded him of what turned out to be one of the most ‘reverent’ hours of my life.

Everyone should have spent an hour in a room with Pete Seeger. The world might be a better place if they had.