↓
Home→Archive→Need We Reinvent the Education Wheel?

Take a quick look at a few of the statistics, and even the teacher’s unions can’t spin or deny it.There is just no polite way to say it. Comparatively speaking, what we call education in America sucks.

American 15-year-olds continue to turn in flat results in a test that measures students’ proficiency in reading, math and science worldwide, failing to crack the global top 20.

U.S. students fall behind 31 countries in math skill and behind 16 countries in reading skill, according to the recent study, “Globally Challenged: Are U.S. Students Ready to Compete?” by Harvard’s Program on Education Policy and Governance. 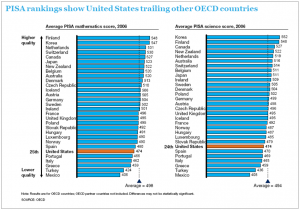 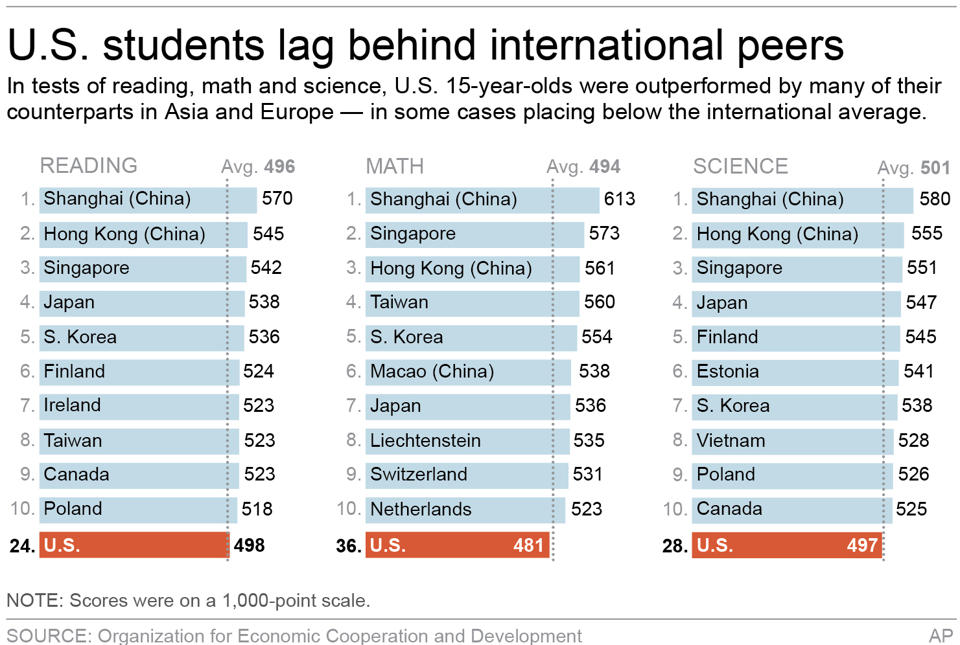 Are We Really That Stuck on “Not Invented Here?”

The first question that we want to ask when a problem occurs is, “what’s wrong, and how can it be fixed?”

Studies are commissioned, committees get formed, reports are written and eventually a huge document full of identified problems, enclosed in a wrapper of vague, bureaucratic generalities and political spin emerges.

The result is usually an ineffective, “look, we’re doing something new and different” surge, followed by another failure, what’s wrong, jerking of the knee cycle.

Perhaps it’s time we stop over analyzing that big pile of things that don’t work in our search for a solution, but study what the other countries are doing right.

There is no shame in imitating success.

If Finland, Canada, Korea and Japan are so high in the rankings, maybe we should look at what they are doing right, with an eye at imitation.

Our public schools prove that merely throwing more money at the situation does not work, if it did, we’d be number one on the charts.

Whether it’s the structure of the curriculum, societal values and philosophies, or some other combination of causes and effects, we can still learn a lot by looking at others with an open mind.

Charter schools and many private schools consistently provide a better outcome at a lower per student cost than most public schools. The staff and teachers admit to being happier, more fulfilled in their jobs and more able to effectively teach.

Somewhere, a lot of people are doing a lot of things that really do work.

Common Core is (among other things) trying to standardize the way people learn and think. That’s not a bad idea when you are building machines. We, however, are building the future of our nation, and our world, and need to adapt the system to the children, not the other way around.

Without free thinking, creative rebels, with a passion for learning and discovery, and the courage and freedom to ask, “why not?” and make the most of what’s left of the American dream, our once great nation is destined to be little more than an asterisk in the timeline of humanity.

It’s way past time, but perhaps it’s not too late to:

Take Back Our Country

Take Back Our Children