As a prerequisite to some forthcoming opinion pieces, I offer an occasional bit of relevant historical information. There won’t be much, only enough to provide some background for the topic at hand, and no more. I’ll try to keep it so simple that even liberals and recent public school indoctrinates can grasp it. 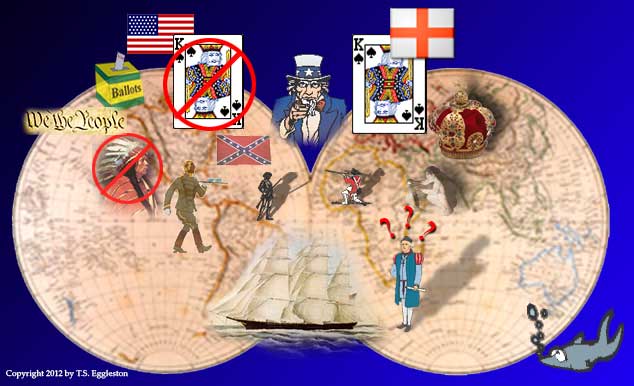 Once upon a time, in a place far far away, a marginally competent explorer named Christopher Columbus thought he could sail directly from Spain to Asia.

While he should be commended for having faith that he wouldn’t sail off the edge of the Earth, he neglected to consider rumors that the Vikings and other folks were spreading about a big chunk of a continent between the two places. Since the Panama Canal didn’t exist, he was pretty well screwed and didn’t know it.

The not-so-bright explorer was so convinced he was right that when he finally did stumble upon some land he called the native people he found there, “Indians.”  He was only off by about Six Thousand miles.

A very competent Italian explorer, Amerigo Vespucci, however, proved that Brazil and the West Indies did not represent Asia’s eastern outskirts as Columbus supposed, but a huge, new continent.

This continent was presumably called America, rather than Columbia, because we didn’t want to name a continent after a screw-up, regardless of how well-meaning he may have been. We saved that name for a more appropriate place, the District of Columbia.

Meanwhile, the Vikings were laughing their asses off because they knew it was there all the time. They were just smart enough not to want anything to do with it.

When word of the New World hit the papers, (there was no radio, TV, or Internet back then) another bunch of people left their old countries (mostly England) and moved there to escape their Kings and Queens and start over.

Some of these people [refugees, colonists, invaders …] came because they were tired of paying taxes to the King when the King gave them no say-so in how he was spending their money.

The mean old, insecure King also forced them all to join his church, so he and his equally greedy evil henchmen would have total control over every aspect of their subjects’ lives.

A really big burr under the blanket of these fiercely independent people, however, was that they wanted to be able to say and believe whatever they wanted, and worship whatever their idea of a God was — or not.

Enough of The People living here in what would become The United States of America wanted these natural rights and freedoms so much that they wrote up a paper telling the King to shove it, declared their independence and proceeded to give some evil tyrants the first of several good old-fashioned American ass-whuppin’s.

A lot of really good people died fighting for our freedom, and “We The People” finally wrote ourselves up a Constitution that guaranteed that we could believe whatever we wanted — or not, and say what we wanted, or not, and not have to put up with the same kind of BS we had to deal with under the King — forever.

Other people soon flocked to the new “land of the free” so that they could work and worship in a land-based on tolerance, common-sense moral law, and love for the brotherhood of man.

As a bonus, these new “Americans” could build out their own dreams (or fail, learn and try again) without having to serve under the unfair taxes and despotic control of a King and his thuggish tax collectors.

Meanwhile, the Spaniards were well underway with their near extinction of a number of South American societies and the conquest of that continent.

A lot of other stuff happened after that. We had that tacky slavery thing where African tribal chiefs conquered neighboring tribes and sold the captured people to other Africans in America, starting the North American Slave Trade.

We bought the South Western part of the country from Mexico and Louisiana from France so that someday we could enjoy California Style Cajun Tacos. We then busied ourselves with the attempted genocide of the indigenous population.

We had more wars, and a few of them were really bad. Earthquakes, fires, droughts, and a really big depression happened. More wars happened and we dropped two nuclear bombs on Japan to put an end to one.

But that’s enough history for now children. It would be a shame to spoil the lesson by entering into areas that are currently considered (by a few, loud extremists) to be so politically incorrect or socially intolerable (woke)  that we shouldn’t discuss them in polite company, or inside ‘their safe space.’

That’s All For Now,