↓
Home→Commentary→Lawyers – The Other “L” Word

When the television series The “L” Word debuted, the Lesbian community not only defused the “L” word, but relinquished their claim to it.The “L” group currently claiming the letter “L” should have been the original owners in the first place, but claiming letters wasn’t popular when lawyers were spawned.

If you want to get angry at a sector of ‘The Evil Rich,’ then get angry at the greedy, predatory personal injury and class-action lawyers.

Token Insincere Disclaimer: Now don’t get me wrong, some of my friends are lawyers.

Like the Sharks to which they are often compared, a certain number are a necessary part of the food chain. 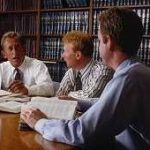 Entertainment lawyers are Saints when they are actually on the side of the artists, but can be predatory animals when they work for the corporations who profit from their art.

Hats off to ‘personal services’ lawyers who help us mere mortals negotiate the legal mazes of wills, trusts, small-business, immigration and the complexities of dealing with one another.

I have no real disdain for tax attorneys, other than a sorrow that they even have to exist, and a hope that they will one day become endangered, if not extinct.

My jury is still out on that whole “Intellectual Property” bunch. I’m just grateful they spend as much time as they do fighting among themselves.

There are two species of divorce attorneys; yours, (good guy) and your spouse’s. (greedy bloodsucker)

Like divorce attorneys, one of the primary reasons that a person might need any lawyer is to defend ones self against another lawyer.

Criminal defense attorneys exist to try to keep the Constitution in force. Like a firearm, you may never actually need one. If you do, however, your need will be desperate. (And you’ll want the most powerful one you can get.)

Any process that attempts to mingle the disgusting corrupt depravity of career politics with the blindness of justice and sanctity of the law can’t be good.

Other than that unfortunate fact, prosecutors are charged with enforcing the laws that our elected representatives pass. Society desperately needs the good ones, but the few bad ones are extremely dangerous to freedom.

A gun can defend you against another gun or a charging animal. Only a bigger, better (more expensive) lawyer, however, can defend against an attack by another lawyer.
Can We Implement Effective Tort Reform?
If you want to get angry at a sector of ‘the rich’ then get angry at the greedy and predatory personal injury and class-action lawyers.

To understand the system, you need to know the two types of damages awarded a plaintiff in a successful lawsuit; actual, and punitive.

Actual damages are those awarded a plaintiff in an attempt to make them ‘whole’ after being damaged in some way by another’s wrongdoing or negligence.

Actual damages can include awards for pain and suffering as well as out-of-pocket and other real expenses.

Punitive damages get their name from the same root as punish. They are designed to punish the wrongdoer, not to enrich the wronged.

Think of punitive damages as a fine or penalty for screwing up..

Punitive damages can be, and usually are, much greater than the actual damages awarded.

Imagine that a person contracts food poisoning at an O’Nasty-Burger restaurant. The plaintiff’s award for hospital and medical costs, lost wages, pain, suffering and other incidentals might be $100,000.

The plaintiff agrees that the $100,000 is sufficient to make him whole again, and that’s the end of the actual damages.

Punitive damages, on the other hand, are meant to punish the wrongdoer.

When a judge or jury says, “This will make you think twice before doing that again!” is where the Multi-Million dollar punitive damages are awarded.

Because there is essentially no limit to the amount of punitive damages, and since the lawyers often get a percentage of the total award, there is an incentive for the the interested parties to fight for as much money as they can.

Enforcing a low cap on punitive damages could, however, limit the power of the courts to send strong messages to wrongdoers with deep pockets.

A $1M punitive damage award against the corner deli would bankrupt them, putting them out of business rather than teaching them a lesson.

For a company the size of O’Nasty-Burger,however, a mere Million dollars is pocket change and doesn’t even equate to a slap on the wrist.

This built-in maximum-damage incentive is one reason that punitive damage awards, and with them, the costs of liability and malpractice insurance are rising dramatically.

Physicians are abandoning their practices because of the high cost of insurance. One estimate is that 30 percent of all health care costs are directly related to liability and liability insurance, and legal expenses and general ass covering.

What we can do is … remove the Maximum Damages Incentive by requiring that, “neither the participants nor their attorneys may benefit from the proceeds of any punitive awards.”

It sounds simple, but it’s just a bit more complex than that.

Lawyers don’t have a monopoly on greed. Less than honest, greedy courts, local governments and public officials are as easily attracted by large sums of money as flies are to a rotting corpse.

This is only a bit more complicated than merely requiring that punitive award proceeds go to the coffers of the awarding jurisdiction rather than the involved parties or setting an arbitrary fixed maximum like traffic fines.

I believe we can agree, giving the courts unlimited reign to stuff their own treasuries by imposing unreasonable punitive damage awards is not a good idea.

Damages awarded by federal courts could go to the home state of the plaintiff at the time of the act or damages.

Damages awarded by state courts could either be distributed up, to the federal general fund, or down, to the home city, town or county of the plaintiff at the time of the act or damages.

In no case, however, should any of the participants in the action receive any benefit, directly or otherwise from punitive damage awards.

One more thing — At judicial discretion, the loser should pay the winner’s legal expenses. This is a proven way to discourage frivolous and predatory lawsuits.

However the system is eventually structured, can we all agree (with the possible exception of my overly greedy tort lawyer acquaintances) — removing the Maximum Damages Incentive is a good start, and that Loser Pays is a good idea?
And that’s the view from Egg Manor,
(aka The House of Perpetual Construction)