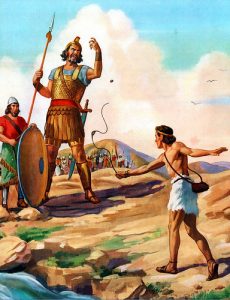 Most everyone should be familiar with the biblical story of little David, who, against all odds, defeated the giant Goliath in a heroic battle.Well I’d like to give this story a bit of a modern spin.

Goliath, was a somewhat dimwitted victim of Gigantism (9 feet tall)

Victims of this disease often experience double vision and/or difficulty with side (peripheral) vision and physical weakness in spite of their imposing size.

Goliath was armed with sword, (which never left its sheath) and a spear, the common defensive weapons of the day. Both of these items are considered ‘close combat’ weapons.

David, however, was armed with a sling and a bag of ammunition. (Stones)

I don’t know how familiar you are with ancient weaponry, but in the right hands, the sling was a formidable offensive military weapon.

The slings of biblical times were not the familiar Dennis the Menace forked stick, but high velocity,long-range military and hunting weapons. Heavy projectiles can be slung over 1500 feet at speeds exceeding 250 miles per hour. 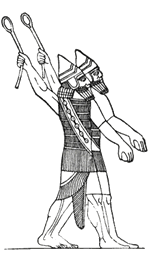 I was growing up a friend made a rawhide sling and practiced obsessively with it for a few weeks. He developed sufficient skill to successfully hunt soda cans, Rabbits and even an occasional Squirrel in a tree. A hard stone about the size of an egg, cracked a cinder block when launched from approximately Twenty Five Feet.

In other words, David brought the ancient equivalent of a modern, offensive, medium range assault weapon to a sword fight.

It is unknown whether the stone that penetrated Goliath’s skull was the cause of death, but David made certain by dispatching the unconscious giant with his sword.

To me, killing a lesser armed opponent, from a distance, with an egg-sized projectile to the head, propelled by the ancient equivalent of an assault rifle, and then dispatching the fallen and unconscious foe with a sword does not strike me as exhibiting a lot of courage.

But that’s just one slant.