Among the contributing factors for the U.S. withdrawal (retreat) from Viet Nam were the brutal and disturbing newspaper and television images of mangled corpses, burned bodies and and other subjects that reflected the pagan cruelty and human toll of that war.

Today’s media, however, shrinking in fear that they might upset or offend someone, refuses to expose ‘polite society’ to the cruelty and inhumanity that surpasses even Nazi Germany, if not in scale, at least in brutality.

Well I say that it’s high time for the media to step up, stop blurring out the blood, guts and other ‘disturbing stuff’ and let the American People get sick, repulsed, and maybe even vomit. Unless they have lost a close friend or relative in this insane conflict, they have no idea of the cruelty exhibited by these Islamic savages.

While we let their prisoners relax and enjoy themselves at Club Gitmo, these animals (no offense to animals intended) dispense the most heinous and uncivilized cruelty to others.

If really gross and bloody stuff upsets you, GOOD! It means that you NEED to see these to have some idea what we are up against.

Editor’s Note: EXTREME CAUTION ADVISED: The videos linked and embedded in this story are extremely graphic, showing brutal executions, and the bodies of those killed in those executions. 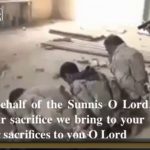 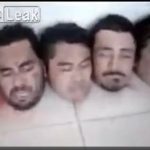 After exposing videos of “ritual human sacrifices” of Christians by Muslims, a former Palestinian Liberation Organization member-turned-Christian has discovered a new set of shocking videos that show human slaughterhouses in which non-Muslims are executed.

The videos, posted by Walid Shoebat, and his son, Theodore Shoebat, are horrific, showing heads neatly lined up against a wall and bodies suspended by their feet in a room.

Also shown is the testimony of a witness who was threatened with being “sacrificed.”

“I have never seen something like this,” Shoebat told WND. “I have been investigating this story for the past two weeks. The story is probably the most horrific I have ever [done]. It proves with footage actual systematic [sl]aughterhouses of human beings, including Christians in Syria.”

The witness video, translated by Shoebat’s organization, Rescue Christians, includes the testimony of Saif Al-Adlubi, who inexplicably was identified for “sacrifice” but then not killed before government soldiers arrived.

“This is the reality of Islam, it is a pagan and utterly depraved and sadistic religion. It takes the soul of a man and purges any remnants of human affection from his very being. Look to your own soul, and understand your own obligation to help the Christians,” Shoebat said.

Reported Shoebat: “The prison centers where the ISIS (Da’ish) controls have become miniatures of what was during the Nazi SS extermination camps, except the ISIS carries out the extermination in a much more horrific way. Da’ish transforms the prisons into kangaroo courts with systematic slaughterhouses and killing centers to exterminate Christians and Muslims who disagree with the Takfiri ideology. Once they are found guilty, the way they deal with the victims was as if they were cattle.”

“The slaughterhouse was on a hill. It is secluded and is void of any homes nearby,” he said. “I witnessed lifeless bodies hanging upside down as if they were slaughtered sheep. In the center of the slaughterhouse is a huge Egyptian about two meters high. He was the one doing the slaughtering.”

Additional footage shows two slaughterhouses, one in Bayyada and the other, from several years ago, in Al-Siba.

Al-Adlubi said the victims included Armenian and Syrian Christians along with Shiite and Sunni Muslims.

Here’s just one of the ‘least offensive’ examples.

If you have the courage and stomach for it, read the full story, and see the rest of the bloody and brutal videos at World News Daily.http://www.wnd.com/2014/03/christians-throats-slit-in-pagan-slaughterhouse/#0igzg02W3DfsapxH.99

And that’s the challenge from Egg Manor.