↓
Home→Photography→Barbara Walters and Sen. Ed Brooke – The Story Behind the Photo

A long time ago, in a galaxy far away, existed a human quality called ‘Ethics.’

Related to integrity, ethics were more powerful than greed and narcissism, and far from today, fairly common among members of the Washington media.

In light of Barbara Walters’ tell-all book, confirming the rumor of her affair with Senator Ed Brooke, I felt comfortable publishing this photo for the first time here a few years ago, (Dec. 2012)

Hearing of her announced ‘retirement,’ I thought it fitting to resurrect it from the dust bin.

If I ever had a National Enquirer Moment, that was it, but alas I was young, and now that I look back at it, quite stupid! 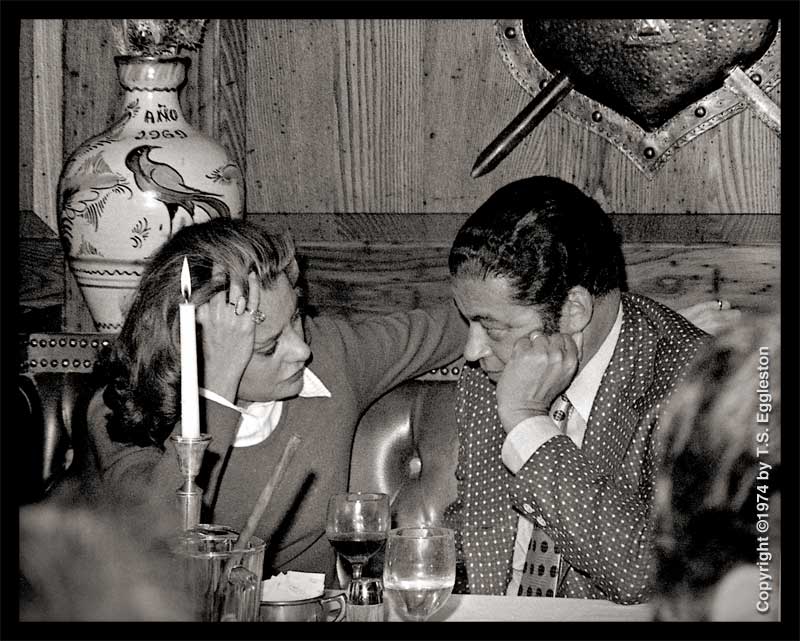 In the mid 70’s, rumors of an alleged affair between broadcaster Barbara Walters and then Senator, Edward Brooke were flying around the Nation’s Capitol. These stories were, as far as anyone could prove, merely rumors. Though these rumors were well circulated and it was considered ‘common knowledge’ there was no hard evidence.

A Washington restaurant, “Los Gitanos” (The Gypsies) offered exceptional, traditional Spanish food, delightful Flamenco entertainment, a great ‘hangout’ bar and a convenient but obscure location. Partly due to the out of the way location, in the basement of a residential hotel in Georgetown, the dark, romantic restaurant became a popular after work and evening destination for politicos and the diplomatic and finance communities. It also attracted a variety of “spooks” gathering intel for any of two dozen countries from Iran to Venezuela.

I was friends with the owners and took on the task of maintaining the photographs on their “Wall of Fame,” in the entry foyer.

With a patron’s permission I would shoot a few candids of them and/or their party and the (cheaply) framed prints went up on the wall the next evening. When the patron made a return visit they could see their photo on the wall and if they wanted, take it home when they departed. Most people were delighted, some were shy and others politely refused, after all, this was a place where a lot of people went to ‘not’ be seen.

I always honored these requests, and the privacy of the patrons.

One evening I was operating primarily on autopilot, moving among tables, asking, shooting and moving on. I didn’t quite connect who I was looking at when I started with my “good evening, if you would like a photograph …” spiel at their table..

I not only received an impolite refusal, I got a ‘dressing down’ from Ms. Walters that I carry with me to this day. It wasn’t just a polite no, it was spat out through gritted teeth. It was emphatic and angry, bordering on vicious and not just a little scary. It’s probably a contributing factor in my choice not to pursue a life among the paparazzi.

Like most recalcitrant children, however, you should never tell me no, it just makes me more determined. Out came the long lens and I got my shot(s) from across the room.

Here’s where the ethical dilemma horned in. I was free to use any of the images that I took for the restaurant in whatever manner I chose. I also knew that I had, probably the only existing ‘documentation’ that could turn rumors and speculation into fact. If I ever had a “National Enquirer” moment, this was it.

Regina Vega, one of the owners, a client, and friend, asked me to please keep it quiet for the good of their business, specifically, her word to those patrons whom I mentioned would rather remain invisible.

Being an honorable person, I did so.

The ‘story’ eventually stopped being a story, and Los Gitanos is, alas, no more.

Dave Kennerly: “A year after I became President Ford’s White House photographer, there were items swirling around in the press suggesting that I was dating President Ford’s daughter Susan (I wasn’t), that I was out of favor with him (I wasn’t), and that my staff was being cut back, and perhaps my whole operation was going to be eliminated (it wasn’t).”

“Those pieces coincided with an appearance I was going to make on the Today Show with Barbara Walters a couple of weeks later in the fall of 1975. On the way over to the NBC studios in New York, I told a photographer buddy who was accompanying me that if the overly inquisitive Ms. Walters brought those matters up I was going to mention the Brooke item.”

“When the time came for me to sit face-to-face with her on live television, she quickly unleashed the heavy artillery, asking me about all of the above. I waited until she finished the anticipated question and said, ‘Well Barbara, I put those stories in the same category as those about you and Senator Ed Brooke, they are rumor and gossip.’ The interview took an immediate turn in my favor.” … read the full story here

From the Article: At the time, the twice-divorced Walters was a rising star in TV news and co-host of NBC’s “Today” show, but would soon jump to ABC News, where she has enjoyed unrivaled success. She said her affair with Brooke, which never before came to light, had ended before he lost his bid for a third term in 1978… read the full story here