↓
Home→Commentary→We Need Zero Tolerance Laws against Abject Stupidity!
Could these moronic policies be planting the seeds for a new generation of school and workplace shooters, mass murderers and serial killers?

Really Stupid Behavior by “Our Servants and Employees” 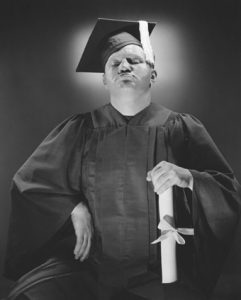 Common sense has clearly gone out of the window in this country.

The letters and E-Mails I receive about the tragedies of Zero Tolerance enforcement and its long-term effects on innocent children would break your heart. The news reports are equally disturbing.

Good, honest, obedient students, with great potential are being placed in the same ‘special schools’ as hard-core gang members, drug dealers, addicts and other juvenile delinquent types. Here they can learn the worst of the worst from real delinquents.

Laws treating a second grade child with a plastic butter knife the same as a 17 year-old gang-banger with a machete are yet another way for those in authority to avoid responsibility for decisions, and avoid decisions altogether.
( See Also: A De-evolution of Leadership )

Imagine a Seven Year old child who wants to save the World from evil.

So — in his childlike (because, he is a child) mind, he filled an imaginary box with imaginary evil.

In the boy’s Seven Year old imagination, he was a playground hero, and just saved the World from evil.

Parent Mandie Watkins said Mary Blair principal Valerie Lara-Black called her to inform her that her second-grade son, Alex, had been suspended.

As reported by the Denver Post, the child is now “confused,” because he got in trouble “for trying to save the world from evil.”

Apparently this particular school, like all others, bans fighting and weapons, as well they should.

Here Comes the However …

Here we have an institution supposedly dedicated to fostering creativity and imagination, actively working to suppress it.

We also have a very confused child, who has now learned a couple of life’s valuable lessons.

Zero Tolerance laws serve one purpose in child development — they teach children some these valuable lessons.

Keep Your Thoughts and Dreams to Yourself

Think about it! Almost ALL serial killers, mass murderers and such are described … “he was such a quiet boy,” and “He always kept to himself.”

If we want children to learn just how arbitrary and corrupt the adults in power can be, then we’re succeeding quite well.

Below are a few examples. — Only space and the reader’s tolerance for idiocy prevent me from listing many more.

Some of the Rampant Stupidity (Random snippets from random sources)

A North Carolina man, Jerry Ward was prosecuted, convicted and fined under a little-used 1805 Adultery Law. He admitted cohabiting with his girlfriend and having sex. District Judge Jimmy Myers, a bachelor and ordained Methodist minister, prosecuted Ward and his girlfriend Wendy Gunter. The adultery law prohibits a man and woman who aren’t married to each other to “lewdly and lasciviously associate, bed and cohabit together”. A request to have the charges thrown out was denied, reports The Charlotte Observer. The case came about during evidence given at a custody hearing over Mrs. Gunter’s children.

A veteran DC Policeman issued 28 parking tickets for failing to park with the front wheels turned to the curb, ON A LEVEL STREET! Meanwhile real criminals are at work two blocks away raping two women.

During Tropical Storm Floyd a woman allowed neighbors (who had to flee their homes because of rising waters) to bring their pets to her home where they’d be safe from the floods. She saved 97 animals. She also received a summons for setting up a “temporary animal shelter”, and faced a $1000 fine.

Charges were eventually dropped, but she was warned not to, “illegally save any animals lives again. ”

When are the powers that be going to wake up, display some common sense and admit they are STUPID to seven decimal places?

When are the people who are supposed to be in charge of this country (the voters) going to take it back?

But that’s another rant!