NOTE: This post has nothing to do with politically-motivated terrorism. That’s another subject altogether. 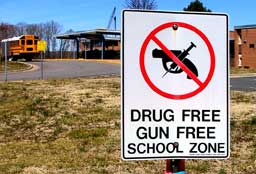 I was also a nerd before there was such a thing as a nerd.

If I was in school today, I would have probably been labeled ADD and drugged into complacency.

I was a target for several school bullies from grades 1-10, including some teachers. Some of this started when I was 13 and publicly supported a Black friend (of my Mother) by attending a 1960 sit-in at the Woolworth’s lunch counter.

The sit-in ended up being much ado over very little, at least in Martinsville. My rather eclectic collection of acquaintances from the local ‘elite’ to a rag-tag mixture of rebels and misfits, however, bothered some of the school’s tough guys.

I dreaded every school day morning like a death-row prisoner must look at their last day on Earth, except I knew I’d have to repeat it tomorrow. Like many other kids in my school, I had easy access to guns.

If any kid ever had the motive, means, and opportunity to blow away a teacher or classmate, I did.

I eventually (10th. Grade) self-mediated the bullying situation by the forcible application of a large rock to the side of an aforementioned bully’s head.

One teacher’s reaction to that event …?

“I wondered how long you were going to keep taking that crap.”

And that was the end of it. No one was suspended, no one was punished and no one was seriously injured anywhere other than in their pride. As a bonus, I found a sense of self-confidence, the bullys learned that everyone has their limits, and all was well without adult, government, or legal intervention.

We were taught to at least try to solve our own peer problems before bringing them to an adult. The LAST THING I or any of my classmates would have dreamed of, however, would have been to shoot or seriously injure someone. Like everyone else I watched Elmer Fudd point a shotgun at Buggs Bunny’s face and pull the trigger. All that happened to Buggs was a soot-covered face. We knew, however, that you don’t point a real shotgun at a person.

Back Then, We Knew the Difference Between Fantasy and Reality

Killing a human being just wasn’t a concept in my mind, or in the minds of my fellow students. Respect for life was something we knew instinctively in our souls.

We Knew that Killing People was Very Very Serious and Very Very Wrong!

Most of the boys (and a few of the girls) in my neighborhood, had guns.

I spent a few weekends with sandpaper, steel wool, gun oil, polishing compound and shellac and the result was a good-looking, tight, powerful, and very accurate long-range rifle.

Anyone could buy a box of surplus NATO ammunition at Robbie’s surplus, or even Fieldale Hardware Store for Two Dollars, with no I.D. and no questions. In hunting season, even some local gas stations sold ammunition.

On Saturdays, Alfred Stegall, the town police “chief” would occasionally stop by the local trash dump when we were shooting at Rats, old refrigerators and pretend Nazis. He never came by to scold us or interfere in any way, he merely wanted to see that we weren’t being careless. He always said, “You boys have a good day now, and try not to shoot each other.” before he left.

On other days we played war games, Cowboys and Indians and Cops and Robbers. For these, of course, we’d leave the ‘Real’ guns at home. We knew they weren’t toys.

Based on the above, our last reunion should have been attended by psychotic veterans, emotional cripples, parolees, grieving parents, and widows.SURPRISE — other than the heroes who gave their lives in the service of their country, we were pretty much alive and well.

Of course, times were different in our childhood. WWII vets and those on active duty in Korea saw atrocities and had traumatic experiences. They went away as young men and returned as trained killers and PTSD was yet to be recognized as anything more than “Shell Shock.”

My parent’s generation lived through severe economic depression and prohibition. They lived through a war so all-encompassing that it truly was a “World War.” Other Men and Women of the time worked in offices, foundries, and factories in support of their nation, families, and way of life. These were our parents.

The difference between then and now….?

Adults, however misguided they may seem in hindsight, not only deeply cared for the welfare of their children, but were at the same time, firmly grounded in reality.

My parents had their problems, and they both passed while I was in my early teens. Apparently my parents had many disagreements, but never in front of me. We were not wealthy, and my father was working much of the time. (Or being shiftless, depending upon which relative is describing him.)

Mom taught me to cook, can sew, and other ‘non-traditional’ skills at an early age because someday, “she wouldn’t be there.”

When dad was home he left no doubt in my mind that he cared. He took me hunting when I was 8 or 9 years old, but only after I knew how to safely handle the .22 bolt-action single shot. My first kill was a rabbit.

When I picked up the dead rabbit, something in my life changed.

The lovable furry little Cotton-tailed flop-eared critter that I should have petted and cuddled was limp, wet, bloody and dead.

Nothing teaches a child more respect for life than holding death in his hands. From that day forward I had deeper respect not only for life but for what a person with a gun could do to that life in an instant and that respect for life is with me today. (BTW, we still ate the Rabbit, after mama showed me how to gut and clean it.) Mama’s Rule No. 28: “You clean what you shoot.”

Our parents didn’t need to child-proof the guns, they chose to gun-proof the children.

Gun-proofing your children is as important as drown-proofing them, i.e., teaching them to swim. We shouldn’t teach children to be afraid of the Water, we should teach them respect for it and how to swim in it.

Are parents doing their children any favors by saying things like, “Don’t go near the water, you’ll get sucked in!,” or, “I never want my child to ever even see a real gun.”

You know the lure the forbidden presents to children. Do we really want to foster this curiosity, or should we teach our children a healthy respect for the things that can hurt them, or others, such as guns, tools, cars, and swimming pools?

Are we doing children a favor, insulating them from anything that could cut, bruise crush or burn? Could today’s sterile, insulated, all winners, no losers, no reality “Childhood Umbrella” have some bearing on how unprepared many people are for life in the real world when reality finally smacks them in the face?

The non-sterile, often dangerous, occasionally frightening, and hostile circumstances of our childhood gave us respect for our lives and the lives of others. Could this possibly have some bearing on the fact that none of my classmates turned into serial killers?

It couldn’t have been the guns, because we all had them. On the first day of Deer season, it wasn’t unusual to see a rifle or shotgun in somebody’s locker when they came in at 2:00, just in time for the last class. What we have to ask ourselves is not only why times were different then, but how.

Guns are pretty much the same as they were at the beginning of the century. They were easier to get then, but the mechanics have pretty much remained the same.

Children are still being born without avarice, hatred, intolerance and bigotry.

Could it be parents who have changed?

No wonder the kids are screwed up!

But that’s another rant!