One morning near Washington DC, Route 123, one of the busier rush-hour routes in the Northern Virginia area, was shut down due to an “explosive device” spotted in the parking lot of a Vienna Va.store.

I’ll grant you that every road closing doesn’t amount to a disaster, but in congested areas like those in and around the Beltway, the impact is usually significant both in time lost and frazzled nerves.

Ratcheting this up a few levels, imagine the danger to life and economic damage of the recent forest fires. Some news outlets credit Al Qaeda, but all it takes is a match to cost millions.

We rarely, however, think about the overall, trickle-down economic impact of these incidents.

Discounting major news makers such as forest fires and explosions, a moderate disruption in DC traffic during the morning ‘drive time’ could have staggering costs.

When you factor in these trickle-down costs, even a minor traffic incident, road closing or property evacuation brings with it major economic consequences. 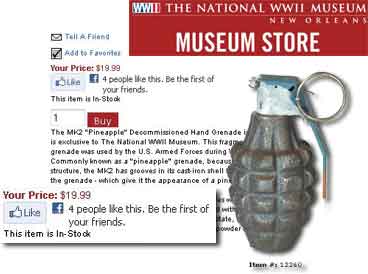 The Vienna, VA incident (above) turned out to be an inert novelty grenade, available at most toy and novelty stores for a few bucks. I’ll leave the reasons why it was there for others to speculate.

All some neurotic Bozo with an agenda must do to ring up a Million Dollars or more of real economic damage, is leave an old briefcase or empty cardboard box on a street corner, bus or train.

A grocery bag stuffed with a couple of road flares and some random scrap pieces of electronics is guaranteed to induce panic, amuse our enemies and cost the local economy Millions of dollars.

In the “olden days” a threat to a school or business might have triggered an evacuation and search.

In today’s media-assisted atmosphere of fear, paranoia and actual dangers, however, entire blocks are shut down. Perhaps Dozens of Three-Letter agencies get involved and on occasion, innocent people can be injured or killed. All it takes is a “burn phone” and Ten minutes.

A few pop-bottles filled with “some kind of liquid” can and have, triggered wholesale evacuations costing Hundreds of thousands of Dollars, and with the Trickle Down Factor … Millions.

With all of the talk of Billions and Trillions in the news, economic damages of a few Million may not seem like much

How should we deal with an organized effort to inflict these Million economic cuts, when all it takes to inflict one is a circuit board and battery taped to an empty Propane can, or even a simple paper bag left in an ‘inappropriate’ place?

We can be assured that research and education on explosive device identification and detection techniques is at the state-of-the-art., and will most likely remain there.

By that time, however, the bulk of the damage has been done. Nearby schools are in lock-down, business are closed, streets blocked off, responders dispatched, traffic disrupted and what might have been an otherwise productive and uneventful day goes to Hell for countless people.

OK, so we’re doing all we can with Device Identification and Detection, so more of that won’t help.

A wise person said, “Just because you are paranoid doesn’t mean that they aren’t out to get you.”

So many cliché’s come to mind … better safe than sorry for one, and the boy who cried Wolf for another.

As soon as the collective paranoia of ‘the people’ subsides to a point where they no longer feel terrorized every place they go, their fear starts to morph into complacency.

Not to worry, however, some other crazy person with or without an agenda will feel the lull and will put some bang in a bag on a bus and re-stoke the fires of fear for another round.

The question is not in whether the cycle repeats, merely how often.

So — to stop acting like paranoid sheep doesn’t provide a solution, merely a brief reprieve.

How about tougher penalties for causing such incidents?

WRONG – for a number of reasons.

It would be difficult to imagine the number of charges that could be brought to bear on an offender under existing law. Felony and misdemeanor charges could range from inciting public panic to assault or manslaughter if anyone affected is injured or killed. It’s safe to say that if Fifteen to Life doesn’t scare them, Twenty-Five to Life, or even Life WOP won’t be a deterrent.

The ugly head of Unintended Consequences is showing more lately, as laws intended to prosecute terrorists, gangs and organized crime are turned against ‘ordinary’ citizens.

Maybe not right away, but at some point some poor schmuck actually will leave his briefcase, or UPS package in a lobby, or on a bus or train. Circumstances will be such that a prosecutor or politician (redundant) with an agenda will turn the law against said schmuck, who was just a regular guy on his way to work.

So it doesn’t look like the solution is going to be more laws.

One plane crash doesn’t change the fact that flying is statistically the safest way to travel.

Likewise, One crazy person, killing Twenty Six people in a school doesn’t change the fact that our primary and secondary schools remain statistically, the safest place for your child to be.

In spite of that, however, the actions of a single psychopath have spurred cries for everything from unenforceable gun bans, to armed guards in all schools, at an annual cost of Tens of Billions.

Only a few, isolated incidents of genuine threat have put us forever at the mercy of forgetful people who innocently leave briefcases, bags, boxes and bottles scattered about on benches, buses and other suspicious places. Add to this pranksters, genuine psychopaths and the usual assortment of crazy or stupid people and Iron Man would be reaching for the Xanax.

What are your ideas — have we already lost this battle to the terrorists, or can we break the cycle?

Let me know your thoughts below.

And that’s the question from Egg Manor,
(aka The house of perpetual construction.)