↓
Home→Commentary→A PSA to The Mainstream Media 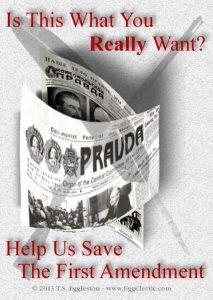 The following Public Service Announcement is from
your fellow Americans and the Second Amendment.

America is at a Crossing

Don’t Get Hit by the Train

Stop the war against law abiding American gun owners for a while, and let the smoke clear. You may be surprised to discover that the bulk of it is your own.

Now that the smoke has cleared a bit, take a serious, studied and informed look at the number of infringements that have been made upon a right that “shall not be infringed.”

Then take a quick look at every dictatorship, Marxist, Communist, Fascist or Socialist Banana Republic government and you will see that they all share one common strategy and a defined tactical sequence.

Listen to We The People, who are asking you please: Get your house in order now! Because in the cold, dark place to which our mutual enemy is taking us, there is Zero difference between “shall make no law,” and “shall not be infringed.”

Once the government is reasonably certain that the population is disarmed, what is their usual next step?

That’s Right — They Immediately Go For

Absolute Control of the Media

(Not just the news media, but arts entertainment as well.)

Is Government Control of Your Right to Free Expression,
as an Artist or Journalist What You Want?

We Hope, For All of Our Sakes that You Do Not!

As unwitting accomplices to the threatened extinction of One Natural Right, you are planting the seeds for your own demise.

We don’t want to win the battle for freedom without you. With you fighting alongside of those who want to destroy all of our rights, it will be far more difficult, but we will win.

We Have No Choice – We Must.

Because like it or not, history repeatedly demonstrates that if we go down, you will shortly follow.

And when we do win, like it or not, we will bring you back with us. So you’d better hope we do.

This PSA brought to you by www.EggClectic.com and Like Minded Americans Everywhere